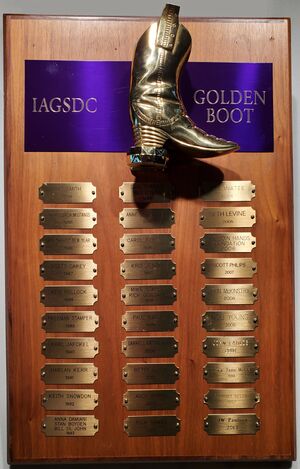 The plaque with the names of the first 30 recipients of the Golden Boot. The plaque was donated by Betsy Gotta in 2002

The Golden Boot is awarded each year to a person or group in our community that has made significant and sustained contributions to the LGBTQ* square dance community.

Few moments at the annual IAGSDC convention are more dramatic than the presentation of the Golden Boot Award. Carefully chosen by the past year's recipient, each awardee has advanced LGBTQ* square dancing in ways that have earned our community's recognition, respect, and gratitude. Past recipients have described an overwhelming flood of emotions when their names were announced. Most also tell of a difficult and sometimes painful process of picking their successor.

Anyone who has attended a convention knows the significance of the Golden Boot Award. Some can even recall each year's recipient. So with all of its honor, prestige, and recognition, it may be easy to forget the award's humble origin.

Origin of the Golden Boot Award

On May 1st, 1983 Art Smith was presented with the first Golden Boot Award at Puddletown Squares' graduation ceremony. As founder of the club, Art received a gilded trophy worth its weight in glue and spray paint. The award was designed by George Gosselin, crafted from a used western boot that had been sprayed gold and embellished with gold chains and rhinestones. What it lacked in charm and sophistication, it made up in feeling. (The other half of that pair of boots became part of the crown for the Honky Tonk Queen.)

After the first convention in 1984, Art was so moved by the spirit of the event that he decided his Golden Boot Award should be passed on to future generations. After receiving green lights from Puddletown Dancers and the president of the IAGSDC, Art prepared to pass on his award at the 1985 convention. At Denver, Art presented an engraved plaque to gay and lesbian square dancing's first club, the South Florida Mustangs.

Each year since 1985, recipients have been announced at the annual IAGSDC convention. It is an honored tradition that the person or group that receives the award selects the next recipient. The selection is kept secret until presentation at convention, and at that time an appropriate token (gift of acknowledgment) is given, along with a golden boot dangle.

The dangles were initially provided by Freeman Stamper, who eventually handed off Golden Boot duties to Andy Shore, the present Golden Boot Stepmother.

In the words of Art Smith:

"The spirit of the Golden Boot Award belongs to everyone. For it is all of us contributing together, sharing our energy, our dedication and most of all our love that is truly the spirit that is honored. When any one of us gives 100% of the best of what and who we are, that is the finest example of the essence of what the Golden Boot Award exemplifies."

The Golden Boot Award is not an official IAGSDC award, but instead is a tradition of recognition handed down each year from one recipient to the next. There are no fixed criteria for selecting the next recipient, but factors include longevity in the activity and the IAGSDC, contribution and dedication to the IAGSDC, member clubs, and square dancing as a whole. Freeman "Steffany" Stamper wrote:

"Making the decision about the next recipient is very difficult.You have to work through your personal grief that you cannot recognize many people-you must choose "one." You must sort through all the politics surrounding your considerations and make a decision with unswerving determination. You must spend many waking hours ruminating and toiling with your emotions. You will have moments of regret and moments of feeling overwhelming demands. You will eventually come to peace with yourself and your decision, sleep will come, and you will focus on only the one person. That, then, is the right person."

Retrieved from "https://iagsdchistory.mywikis.wiki/w/index.php?title=Golden_Boot_Award&oldid=20892"
Categories:
Cookies help us deliver our services. By using our services, you agree to our use of cookies.