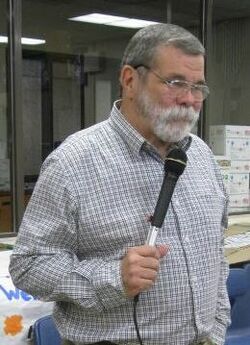 Harlan Kerr
aka Belle Whatling
aka The Funpants Kid

Harlan began square dancing in 1983 as one of the founding members of Puddletown Dancers. As first chairperson of the IAGSDC he was an instrumental member of the committee that put together the first convention, All Join Hands, together, Soon Harlan found himself teaching Advance and Challenge dancing in tape groups. His reputation as a tape leader soon spread throughout the state of Washington and he found himself with several straight as well as gay tape groups. This led to requests for him to teach workshops at I.A.S.G.D.C convention.

When he was asked to teach a Mainstream class, Harlan made the decision to begin calling. Soon he calling through the C-2 level. He made his debut as a convention caller in Phoenix, and called all levels at the New York convention. Northstar Promenade marks his third convention of calling.

Harlan supports and promotes square dancing at all levels and has made appearance at many fly-ins including Advance and Challenge Fly-ins.[1]

In 1991, Karl Jaeckel presented Karl with the Golden Boot Award.
In 1992, Harlen presented the award to Keith Snowdon.

Retrieved from "https://iagsdchistory.mywikis.wiki/w/index.php?title=Harlan_Kerr&oldid=26237"
Categories:
Cookies help us deliver our services. By using our services, you agree to our use of cookies.