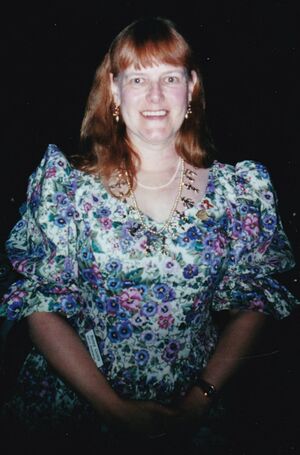 Betsy Gotta of North Brunswick, N.J. has been square dancing for 36 years and calling for 27 years. She currently calls regularly for seven square dance clubs, two plus workshops, and two beginner classes. Averaging about 200 dances per year, Betsy has called at every National Square Dance convention since 1963. She is a founding member of the Callers' Council of N.J. and is a member of the Board of Governors of Callerlab. Betsy calls at all programs, from traditional contras through C-2, and teaches Rounds with her cuer/husband Roy.[1]

In 2001, Darrell Ertzberger presented Betsy with the Golden Boot Award.
In 2002, Betsy presented the award to Andy Shore.

Betsy is one of three groups to receive both the Golden Boot and CALLERLAB's Milestone Award. The others are Barry & Pam Clasper and Vic & Debbie Ceder

Retrieved from "https://iagsdchistory.mywikis.wiki/w/index.php?title=Betsy_Gotta&oldid=25138"
Categories:
Cookies help us deliver our services. By using our services, you agree to our use of cookies.