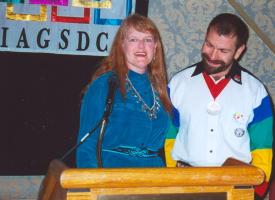 Last year, when Darrell Ertzberger passed the honor of the Golden Boot to me, he mentioned reaching out to both the Gay and Straight square dance communities. This year's recipient also works for the square dance activity overall.

Since Vancouver, I considered many factors to come to my final person. This person is a square dance caller. They are a member of GCA, their area Callers' association, and CALLERLAB. They have called in many US states and overseas. This person is working with newer callers and has helped at the GCA Schools in an unpaid capacity. Although I gave serious consideration to people from the East Coast, this person is from the West. This person has served as President of the GCA and is currently serving as Vice-President of their Local Callers' Association.

This person has made the connection to the straight square dance community through their work with CALLERLAB. Since joining in 1990, he has attended 11 conventions and has lead several "birds-of-a-feather" sessions such as Calling for Gay Clubs. He was a panelist at the 2001 convention, where he was chosen for his skill as a teacher, not just a "gay teacher". He serves on several committees, and is Vice Chairman of the CALLERLAB Foundation Fund-Raising Committee. When the Foundation needed money, He made a large anonymous donation to help. Later that donation was recognized and he received the Foundation Directors award. In an organization, which has many conservative members, he has been proudly recognized as the Member-Representative for the IAGSDC.

He has also represented the IAGSDC at the "Summit Meeting", which is a meeting of all the major square and round dance organizations from around the world. This meeting usually takes place at the National Square Dance Convention.

By now you know that the recipient is a man from the West Coast, and a caller. He is also the first openly Gay candidate for the CALLERLAB Board of Governors. This year I am pleased and proud to announce the recipient of the Golden Boot is Andy Shore.

Retrieved from "https://iagsdchistory.mywikis.wiki/w/index.php?title=Golden_Boot_2002&oldid=25168"
Category:
Cookies help us deliver our services. By using our services, you agree to our use of cookies.