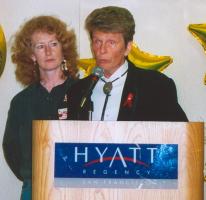 Look around at your table. We’re men and women of all races, ages, personality types (definitely!) We have very few similarities in our life, but we do share a common thread – our love-affair with square dancing. Whether you know it or not, everyone gives me back 10 fold what I give as a caller and a dancer.

Both Lu and I were stunned when Anna, Stan, and Bill presented us with these awards last year – both of us “just keep doing what we do”. I was thinking back earlier this year what it is that I’ve given people that could change their fife. What I could think of was:

It is very difficult for the recipient in 1995 to sit down and select one person that exemplifies what we are and who we are as gay and lesbian square dancers. Since the tradition started with the first award in 1984, there have been singles given, groups given, and several people at a time recognized. All very special, and all very surprised. This is an informal process and a very personal one.

Several factors came into play for us in selecting the 95 recipient:

And now that gay square dancing is well into its second decade, longevity.

Both Lu and I had lists of many people whose contributions are large, and whose dedication is unwavering. Early on, both of us argued that one person should be singled out for this recognition. I will turn it over to Lu to announce the recipient, and tell you about this person.

(recreated from notes he prepared ahead of the presentation)

The recipient has many qualities that make their service stand out:

A long term involvement in calling for the Gay/Lesbian community even before she discovered she was a member of that community. A national and international caller of the highest level, she never allowed peer pressure to dissuade her from her involvement in Gay/Lesbian square dancing while she was living as a straight, married woman. Since coming out as a member of our community, she has continued to represent us proudly to the world of straight square dancing wherever she goes.

She was instrumental in getting Toronto’s Triangle Squares off the ground and in supporting the club while she lived in Ontario. She has been the club caller and teacher for the Vancouver club since moving to that city.

Although she can command respectable fees as a top international caller, she has always made herself available to the Gay/Lesbian community as a caller for fly-ins and special events, giving special consideration to small and out-of-the-way clubs, for whom her presence was a special treat. She has been a member of the calling staff at every convention since Phoenix, with the exception of Miami, where a change in the dates created a conflict with a prior commitment.

She has been continuously involved with the efforts of the IAGSDC community to develop callers from among its ranks, generously giving time and effort to the callers schools of the Gay Callers Association and assisting budding callers in their efforts.

She is without doubt, one of the most beloved figures in Gay/Lesbian square dancing. She is one of the most genuinely pleasant personalities around, totally without airs or attitude. As a caller, she manages to be both interesting and challenging, keeping her dancers on their toes, while at the same time making it obvious that square dancing is supposed to be entertaining and fun. You will never see her try to dazzle a floor with choreographic cleverness that results in a high percentage of squares breaking down. She never seeks to embarrass her audience with what they don’t know or can’t figure out. She will make you work at your dancing, but she will give you all the help she can along the way, and make sure you have a damned good time doing it.

This year’s recipient is ...

Retrieved from "https://iagsdchistory.mywikis.wiki/w/index.php?title=Golden_Boot_1995&oldid=19629"
Category:
Cookies help us deliver our services. By using our services, you agree to our use of cookies.