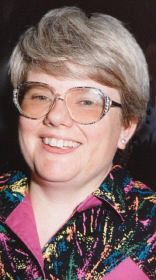 Ett McAtee is affectionately known as "Just Ett, Hon!" to many who know her, and as "Ettila the Hon!" to her new Plus, Advanced and Challenge graduates. She started square dancing on January 13, 1987 with Chesapeake Squares, and first picked up the microphone to call in the summer of 1989. She soon was a regular instructor and caller with both Chesapeake Squares and DC Lambda Squares. In addition to currently calling her own club, Ettseteras (C1), she also called for the Offsets (C2) and Fifth Wheelers (C3A/C3B) clubs in the past. Ett has called in Canada, Sweden, Germany and Japan, and calls various weekends around the country every year. She is a member of Washington DC's association of callers (NCASDLA), as well as of the Gay Caller's Association (GCA) and Callerlab, the international "club" of callers.

Ett's love of square dancing shows from either side of the microphone, as anyone who dances with and to her well knows. The idea of sharing a common language between dancers and callers appeals to her, especially on the international scene. When Ett says, "Square up!" she means it! Parlez vous square dance?[1]

In 2004, Rick Hawes presented Ett with the Golden Boot Award.
In 2005, Ett presented the award to Seth Levine.

Retrieved from "https://iagsdchistory.mywikis.wiki/w/index.php?title=Ett_McAtee&oldid=25088"
Categories:
Cookies help us deliver our services. By using our services, you agree to our use of cookies.