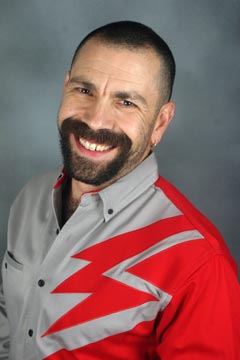 Currently, Andy lives near Santa Cruz on the north central coast of California. He calls contra dances regularly around the Monterey and SF bay areas as well as traveling further afield. Andy calls MWSD 2 nights a month for the Outlaws (San Jose) and the Sage Stompers (Seaside).

Andy began square dancing as a member of El Camino Reelers 3rd square dance class in the Fall of 1986, and attended his first IAGSDC convention Explode The Rose in 1987. Shortly thereafter, he was invited to join the Gold Rush performance team based in San Francisco. He danced for many years with El Camino Reelers, Foggy City Dancers, Midnight Squares, Stanford Quads, and Top Cats.

By 1989, Andy had tried calling some singing calls for Gold Rush and at club record nights for El Camino Reelers and Foggy City Dancers. Andy attended the first GCA Caller School in New York in 1989, and called his first convention "tip" at Peel The Apple in New York. Andy was also one of several callers for the Foggy City Performance Team using complex, well-rehearsed choreography by Steve Browning.

In 1991, Andy became club caller for El Camino Reelers in Palo Alto, CA., and taught Basic, Mainstream, and Plus classes for them until he moved away in 2004. In 1992, Andy started teaching Basic and Mainstream for Foggy City Dancers in San Francisco, again serving in that role until 2004. Andy also taught Advanced and C1 classes for El Camino Reelers and Midnight Squares.

In 2005, Andy discovered the joys of contra dancing and attended his first LGBTQ* "gender-role free" contra dancing camp in May. In August 2007 Andy attended a contra callers' school and by Fall 2007, Andy was calling contras too.

Andy has been on the calling staff of six IAGSDC conventions: Diamonds In The Desert Albuquerque 1992, Stars, Thars & Cable Cars SF 1996, Anchors Aweigh With a Half-Sashay San Diego 2003, Remake The Heatwave Phoenix 2004, Star Thru The Silicon Galaxy Santa Clara 2005, and Gone With The Windmill Atlanta 2011. Andy is also a caller coach and has been on the staff of GCA Caller Schools, the Rhythm Records Caller School, the Northeast Caller School, and the Alguire Memorial Callers School.

In 2014, Andy received his 25 Years of Calling recognition from CALLERLAB. In 2017, Andy was one of 6 contra callers featured at Catapult Showcase! weekend in Atlanta, GA.

A partial list of Fly-Ins and events Andy has called:

In 2002, Betsy Gotta presented Andy with the Golden Boot Award.
In 2003, Andy passed the award on to Rick Hawes.

Videos of Andy calling for the Foggy City Performance Team: [2]

Andy calling Pickle Up a Doodle at Gone With The Windmill in 2011: [3]

Retrieved from "https://iagsdchistory.mywikis.wiki/w/index.php?title=Andy_Shore&oldid=24418"
Categories:
Cookies help us deliver our services. By using our services, you agree to our use of cookies.