When Jim Mayo asked me at CALLERLAB in 2017 to write a summary history of LGBTQ square dancing, I was somewhat agog. How can one possibly write a “brief” description of 34 years of history? However, it IS Jim Mayo who asked, and I wouldn’t dream of disappointing him.

The Start of LGBTQ Square Dancing

Depending upon who you ask, LGBTQ square dancing can most likely be considered as starting in January of 1977, when the Miami Mustangs club (later called the "South Florida Mustangs") organized for the purpose of reinstituting and perpetuating "the unique art form of Arky (of the same sex) Square Dancing." The initial dancing was organized by bar "teams" that competed with each other as an intramural social activity, and the Mustangs formed from this initial group of dancers.

By 1982, a group of San Francisco dancers spun off a new club called Western Star Dancers, specifically formed to be able to dance to standardized (CALLERLAB) calls, rather than Skip Barrett's proprietary choreography and singing calls. That same year also saw the founding of Puddletown Squares in Seattle, Washington, DC Lambda Squares in Washington DC, a third club in San Francisco (Midnight Squares), and thanks to caller Dave "Happy" New Year, the New Year's Resolutions club, which started in Palm Springs, then held classes and dances in Orange County and Long Beach, California.

Over the weekend of July 30-August 1, 1982, the Reno Gay Rodeo was held, at which event the concept of a national LGBTQ dance organization was discussed. The national organization was intended to cover square dancing, clogging, and other forms of dance.

By the time 1983's Reno Gay Rodeo rolled around in August, the South Florida Mustangs had hosted the first ever LGBTQ fly-in weekend, Rosetown Ramblers started in Portland, Oregon, and The Wilde Bunch started in Albuquerque, New Mexico...and suddenly there was sufficient momentum to continue and refine the previous year’s proposal into a national gay square dance association.

It was in Hollywood, Florida at the South Florida Mustangs' 1983 fly-in that the IAGSDC was founded by dancers from Denver, Seattle, Fort Lauderdale, and San Francisco. Neither Palm Springs nor D.C. Lambda Squares attended, although they were dancing at the time.

The first draft of proposed by-laws was presented to participating clubs at the 1983 Reno Rodeo. Seattle, Washington was selected to host the first Convention. Harlan Kerr, who lived in Seattle at the time, was chosen as the Association's interim Chair. ]] 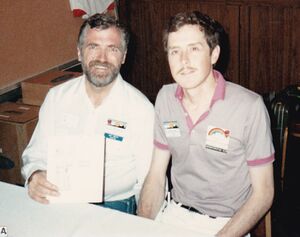 That September, Harlan Kerr sent out the first monthly communication of the newly formed National Association of Gay/Lesbian Square Dance Clubs, and by November he sent a letter asking clubs all over the country to join the association. That same month the first Canadian LGBTQ square dance club was formed in Vancouver by Art Smith, an American who spent much time "up North". The new club was called Squares Across the Border.

Art actually founded several LGBTQ square dance clubs throughout the Pacific Northwest, and has been called the "Johnny Appleseed" of gay square dancing. Another person who falls into the "Johnny Appleseed" category is Dean Hofmann, one of the original Mustangs who danced with and supported clubs in Denver, Phoenix and San Diego. He and Ralph Smith founded Finest City Squares.

The NAGLSDC eventually transformed into the International Association of Gay/Lesbian Square Dance Clubs (IAGSDC) with the joining of the Canadian club, and the first IAGSDC convention was held April 6-8, 1984 in Seattle, Washington. Over 120 clubs (including defunct groups) have comprised the IAGSDC over the years.

Similar to "straight" national, clubs in different cities bid each year to host the IAGSDC convention. Bids and interest in bidding can run as far as out as five years.

IAGSDC conventions are very different from the nationals most dancers are used to. The scale is generally much smaller, with anywhere from 800 to 1,200 dancers in attendance. There are a number of special interest activities, ranging from specialty tips to "magical mystery" bus tours of each city (called a "Fun Badge Tour") to an annual drag show (the "Honky Tonk Queen Contest").

The Gay Callers Association and IAGSDC and CALLERLAB

The Gay Callers Association (GCA) was formed, in part, due to the difficulties LGBTQ square dance clubs encountered in trying to book callers. Many callers in the early 1980’s were hesitant to call for a gay club, fearing cancelled bookings from straight clubs. This led to the formation of an organization to develop callers who wouldn’t be afraid to call for gay clubs.

At the first IAGSDC convention in Seattle in 1984, called All Join Hands, Elmer Sheffield, Paul Marcum, and Chris Phillips led a session titled "Introduction to Sight Calling", out of which grew the idea of a caller organization that would promote gay callers.

In 1988, during the Phoenix IAGSDC Convention, Cross Trails In The Desert, Harlan Kerr and Anna Damiani met with Bill Eyler and Chris Phillips to get the idea rolling. The first issue of the "The Call Sheet", a newsletter for gay callers, was published by Harlan and Anna in early 1989.

1989 also saw the first GCA-sponsored caller school in 1989. Among the attendees were Karl Jaeckel (who became the IAGSDC's primary historian) and Andy Shore, who went on to call for a number of SF Bay Area clubs, including El Camino Reelers and Foggy City Dancers. During his ECR/FCD teaching years, Andy synchronized the teaching orders for both classes, so that a student who missed a night in one class could go to the other class to catch up (or refresh knowledge). Andy Shore also is responsible for early IAGSDC visibility within CALLERLAB, including holding a "birds of a feather" session at CALLERLAB with Mike Jacobs, on the topic of calling to LGBT clubs, and being the first openly gay candidate to run (twice) for the Board of Governors.

Membership in the GCA is open to all callers, as is the GCA’s annual caller school, which is held prior to each IAGSDC Convention.

GCA Caller School has featured CALLERLAB Certified Calling Coaches (such as Betsy Gotta and Deborah Carroll-Jones) and well-known international callers (such as Sandie Bryant, Anne Uebelacker, Barry Clasper, and Dave Wilson). The 2017 school was taught by Randy Dougherty and Ett McAtee, with Bill Eyler and Jane Clewe acting as Teaching Assistants. The 2018 school will be taught by Ross Howell and Anne Uebelacker.

In 2006, the GCA's publication, The Call Sheet, evolved from an 8-page newsletter into a 40+ page quarterly technical journal. Subscriptions to The Call Sheet are a benefit of GCA membership, which is open to anyone.

In the early years, square dancing gave the LGBTQ community an opportunity to come together to celebrate their community in a social environment. It was a sign of maturity that LGBTQ dancers began meeting at schools, churches and recreation centers. One theory of why LGBTQ club enrollment is declining is that in our contemporary society, young LGBTQ dancers no longer required a LGBTQ-specific/exclusive social space to feel comfortable with themselves.

There are some differences between regular and LGBTQ square dance clubs.

An amusing side effect of “genderflexible” dancing is that without visual cues to dance gender once a square is in motion, many LGBTQ dancers have developed a compensating mannerism of shouting out their dance gender when the caller asks for a specific set of dancers to do so something. For example, if “Boys Trade” is called, all of the dancers dancing the boy part in the square will yell “Boy!” to make it easier to identify who they should be working with.

Significantly, square dancing gives LGBTQ dancers an opportunity to feel comfortable about their sexual orientation in a social environment. Allan Hurst from the IAGSDC History Project recalls a passerby at a Utah Pride festival bursting into tears upon seeing a booth for Temple Squares to recruit dancers. The crying visitor explained that all through grade school and high school, all he had ever wanted to do was to dance with his best (male) friend, with whom he was in love…but due to the strict boy/girl gender requirements of normal square dancing, it was a dream he could never achieve.

Square dancing gives LGBTQ folks a sense of community, one they’re proud of and one they can celebrate. The dancers’ excitement shows in their enthusiastic style of dancing. As large and fragmented as the IAGSDC has become, still a sense of family prevails. If you come to visit us, you’ll be welcomed with open arms and a lot of whoopin’ and hollerin.’ Our motto in spirit: “Don’t Stop, and Don’t Slow Down!”

In 1993, two dancers named Luis Torres and Roger Coffin compiled, edited, and assembled a self-published book called Ten Years IAGSDC: A Collection of Pages From Our Memory Book. The book contained reproductions of letters regarding the forming of the IAGSDC, illustrations of the first ten IAGSDC Convention posters, and interviews with key figures in LGBTQ square dancing. Unfortunately, the book had only one printing.

In 2006, Allan Hurst sought and obtained permission to recreate the book electronically, as an Adobe PDF file. Because the working proofs and prints from the book had long since been discarded, the book was digitally recreated, one page at a time, and the illustrations and covers scanned and digitally cleaned up. All of this was performed by a team of seven volunteers.

The unofficial archives of the IAGSDC reside at the home of Karl Jaeckel, the IAGSDC's archivist and primary historian, in Denver, Colorado. Karl has assembled a collection of binders outlining both the history of the Rocky Mountain Rainbeaus and the IAGSDC, and club photos from every IAGSDC convention.

Once digitalization is complete, the physical collection will eventually be donated to a suitable (as yet not chosen) educational institution for conservation and maintenance for future historical research.

Karl Jaeckel and Allan Hurst are the historians for the IAGSDC. Karl owns and maintains the Karl Jaeckel Archives in Denver, Colorado, which contains the history of the IAGSDC and Rocky Mountain Rainbeaus. Allan is the director of the IAGSDC History Project, which created a digital version of the TEN YEARS IAGSDC book, and created an online history wiki (http://history.iagsdc.org). Allan is also the editor of The Call Sheet, the professional journal of the Gay Callers Association. Allan lives, dances, and calls in Sunnyvale, California. Allan gratefully acknowledges Karl's assistance in organizing and tweaking key portions of this history.

Retrieved from "https://iagsdchistory.mywikis.wiki/w/index.php?title=Overview_of_LGBTQ_Square_Dancing&oldid=20890"
Category:
Cookies help us deliver our services. By using our services, you agree to our use of cookies.