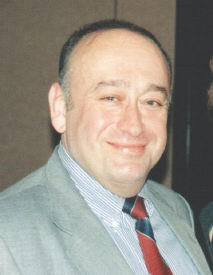 Mike Jacobs began square dancing in 1962, and began his full time calling career in 1979. In 1987, he relocated to the Washington D.C. area, where he currently calls for five local groups. Mike spends about 50 weekends a year calling in 38 states and Canada. An active member of Callerlab, Mike is also on the staff of the National, American Southern and Canadian Challenge Conventions. Mike is noted for his distinctive musical approach, smooth choreography and "positioning with taste.[1]

Our recipient tonight is primarily known for calling one of the aspects of the square dance activity. He has, however, been active in many different parts of the activity. Once again, the specialty for which the person is known is only a part of the entire picture.

This person was born in Kentucky and started square dancing at age ten. He started calling as a teen, and set a goal of becoming a full-time caller. He achieved that goal, calling extensively throughout the United States, Canada, Europe, Japan, and Scandinavia. He has called all programs, including Basic and C-4.

In addition to his interest in square dancing, this individual was a complex person with many interests. In high school, he played catcher on the baseball team and always maintained an interest in all aspects of baseball. He also was interested in musical theater and performed in his college production of “The Fantasticks”. Other interests included trivia, reading, old movies, and cooking. Our recipient was on the debating team in both high school and college. The debating skills he learned there allowed him to argue a point strongly without taking the discussion personally.

In square dancing he was mentored in his early career by Ray Bohn and Stew Shacklette. As his calling career continued, he started to mentor new callers and became a CALLERLAB Accredited Caller-Coach. He enjoyed following the career of callers he mentored, and maintained an interest in their development. In 1998 USDA hosted a meeting to start the idea of the various national square dance organizations working together to promote the activity. This meeting included Larry Cole, who represented CALLERLAB. Larry brought the idea back to CALLERLAB. Then, as Chairman of the Board of CALLERLAB in 1999, Larry took this idea to ROUNDALAB.

The idea that a coalition of the major national square, round and contra dance groups would enable us to pool our resources to better promote our dance activity was not necessarily totally popular with the various organizations. Our honoree, who took over the job of representing CALLERLAB from Larry, believed in that idea and was instrumental in bringing it to fruition. Jim Maczko stated that it was tonight’s recipient who made the rest of us realize that it was important enough to come together. In June 2002, after the St. Paul National Square Dance Convention, this individual brought Jerry and Del Reed and Tom and Bev Rudebock to the USDA Hospitality Suite to discuss bringing all of the dance groups together. This was followed by a group meeting in conjunction with the CALLERLAB Executive Committee meeting in Florida in October 2002.

Our recipient functioned as Chairman for that meeting and his diplomacy helped the representatives begin to communicate. Groups represented were: CALLERLAB; American Callers Association (ACA); Contralab; International Association of Gay Square Dance Clubs (IAGSDC); National Square Dance Campers Association (NSDCA); National Square Dance Convention Executive Committee (NEC); ROUNDALAB; Single Square Dancers USA (SSDUSA); United Square Dancers of America (USDA); and USA West Square Dance Convention Policy Board (USA West). At that time, several of those organizations had issues with (and some distrust of) other organizations. This year’s recipient got the representatives to speak together and focus on common interests instead of their differences. He was also serving as Chairman of the Board of Governors of CALLERLAB at this time.

The group continued to meet two to three times a year with different groups hosting and serving as rotating Chairs. Our honoree chaired the meeting in June 2003 following the Oklahoma City National Square Dance Convention, and again in October 2003 he chaired the meeting following the CALLERLAB Executive Committee meeting. This meant that our recipient, Mike Jacobs provided a major leading role in organizing the group now known as ARTS Dance.

In March 2004, the first officers were elected: Jim Maczko, Chair; Henry Israel, Vice Chair; Edythe Weber, Treasurer; and Jerry Reed, Secretary. Mike Jacobs was serving as Chairman of the Board of CALLERLAB during this whole time period (2002-2004). Unfortunately, we lost Mike in December 2009.

Mike was known primarily for calling Advanced and Challenge Programs, but he worked with a Senior Basic group, and taught two beginner classes while he was involved in the ARTS Dance development.

Ladies and Gentlemen, I am honored to represent CALLERLAB in presenting the Milestone Award to Mike Jacobs. Mike's daughter, Kristy Dalton, is here to accept the award.[2]

Retrieved from "https://iagsdchistory.mywikis.wiki/w/index.php?title=Mike_Jacobs&oldid=23590"
Categories:
Cookies help us deliver our services. By using our services, you agree to our use of cookies.