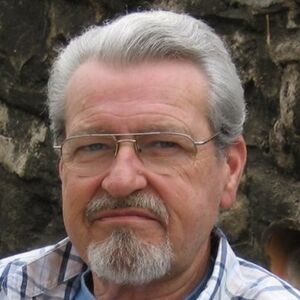 Ross has always been intrigued with choreography and in November 1970 he called for the first time at the Mainstream level and quickly moved on into the Advanced and Challenge levels. In 1974 he quit his "day job" to devote more time to calling. The secret of Ross' fame is his smoothness and relaxed atmosphere of his dances. Although his choreography may be difficult, intricate, and mentally taxing, the dancers are stimulated because the dancing flows. He insists that he doesn't do anything special to achieve this. The characteristics which peg him as one of the top callers in the country don't just happen, they're the result of hard work, a natural ability, and an inherent feeling toward his dancing floor. And it's smoooooth, man, smoooooth!!![1]

Retrieved from "https://iagsdchistory.mywikis.wiki/w/index.php?title=Ross_Howell&oldid=26106"
Categories:
Cookies help us deliver our services. By using our services, you agree to our use of cookies.