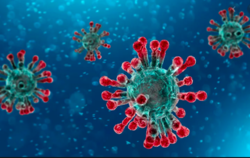 The stuff of pandemic nightmares


The World Health Organization (WHO) declared the outbreak of this disease a global health emergency in January 2020, as cases surged in China, where SARS-CoV-2 was first detected. On 11 March 2020, WHO assessed the severity of this outbreak and declared it a pandemic. A full map tracking every reported coronavirus case can be found at The New York Times.


Suspension of square dance activities
As recommended by the Center for Disease Control (CDC), "social distancing" became a strategy for reducing the spread of COVID-19. This meant suspending classes, workshops, and other dance events until more information could be gathered about the pandemic. Many states enacted further strategies to reduce the transmission of the coronavirus, such as mandatory face masks when in public, and sheltering in place.
In 2020:

Statement from IAGSDC Officers posted March 16, 2020
Dear Fellow Square Dancers,
As we are sure you are aware, we are all facing a serious public health crisis with the ever increasing proliferation of the COVID-19 (coronavirus) pandemic. We all cherish dancing, but we cherish all our dancing friends — all our °square dance family° — even more, and we want everyone out there to remain safe and healthy. Representatives of member and affiliate Clubs, please take whatever steps you can to ensure your dancers’ health and safety above all else until this pandemic has run its course.
Our square dancing activity involves touching, hugging to show our thanks at the end of tips, and generally assembling closely together in squares and as a team to have fun and enjoyment. We are aware that many clubs and groups may choose to temporarily suspend dancing due to the COVID-19 threat. For our member clubs that are continuing to dance, we encourage you at a minimum to take steps to temporarily avoid all direct touches that could accidentally lead to the spread of COVID-19.
The news surrounding the virus seems to change daily, even hourly. The IAGSDC officers ask that Club representatives continue to pay attention to and follow your federal (including the CDC), state and local governments’ guidance regarding group activities and group assemblies. The WHO is also another vital reference point for us all.
We will continue to monitor the situation and work with the Denver convention planners in terms of the status of the upcoming Take A Peek convention in July.
One piece of encouraging news coming from China now is that after just over 2 months, their numbers of new COVID-19 cases are plummeting. We are still approximately 3.5 months away from the Denver Convention, so let’s hope that much progress will be made in the fight against COVID-19 between now and then.
Please, everyone do what is necessary to stay safe. We really mean it when we say, please take care of yourselves.
Your IAGSDC Officers


Consequences of COVID-19 within the square dance community

Information can be found at Gallina's Groupies on Facebook

Retrieved from "https://iagsdchistory.mywikis.wiki/w/index.php?title=COVID-19&oldid=20626"
Category:
Cookies help us deliver our services. By using our services, you agree to our use of cookies.