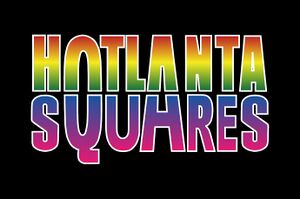 History: A couple of newcomers to Atlanta, life-partners Ken and David learned to dance with the South Florida Mustangs in the early '90s. They were surprised that there wasn’t a gay square dance club in the Atlanta area. Sure, there were plenty of square dance clubs listed with the Metro Atlanta Square Dancers Association, but none that were dancing "all position" at all levels or the high energy dance style typical of gay square dance clubs around the country. Looking to keep from getting rusty, Ken visited the Chesapeake Squares in Baltimore, Maryland in the summer of 1999. It was so much fun, and the club in Baltimore was so encouraging, that he returned to Atlanta determined to get a club started for the gay and lesbian community.
With lots of help and encouragement from the International Association of Gay Square Dance Clubs, "southern sister clubs" like the Rocket City Rainbow Squares, the Raleighwood Squares and the Magic City Diamonds, and the local Atlanta club, the Calico Swingers, the Hotlanta Squares began.
In February 2001, Ken and David pushed back the furniture in their living room, used taped lessons on loan from the Rocket City Rainbows, the assistance of an occasional volunteer caller (Thanks Neil!) and little by little, were joined by a group of newcomers and experienced square dancers that became the Hotlanta Squares. In April 2001, at the International Association of Gay Square Dance Clubs (IAGSDC®) National Convention in Vancouver, BC, the Hotlanta Square's petition for membership was accepted by the Executive Board.
In July 2001, they held their first open house and as the beginner group that started in February moved on to more advanced lessons, a new beginner group was formed. The club rented space from the First Metropolitan Community Church and J.R. St. Jean took hold of the microphone and began lessons in earnest. After several years of calling for Hotlanta Squares J.R. moved to Florida. The club then hired Johnny Jones to call for the club. He was a consummate professional, nationally recognized caller. Unfortunately, Johnny passed away because of complications from diabetes. Hotlanta Squares was in a fix, but one of our local dancers agreed to be the caller for our club. Enter Mike Shagina. He took the reins taking on Mainstream, Plus, Advanced and Challenge level classes and has taught us well. Since we are a rather large club we recently decided to hire another dancer to teach our mainstream and plus class. Enter Clara Welch. Our club is thriving and teaching new individuals twice a year on how to master the art of square dancing.
In January of 2002 Hotlanta Squares hosted their very first Fly-In. We gathered over the MLK holiday weekend at St. Marks Methodist Church. We were so pleased to have over 80 dancers join us for our very first Fly-In. Since then we haven't looked back. The Decatur Rec. Center has been our home for several years. We have hosted this annual Fly-In every year, except for 2011 because that was the year Hotlanta Squares hosted the annual IAGSDC convention. Instead of our annual Fly-In we hosted an all-day Anniversary Dance that year. Hotlanta Squares Promenade Down Peachtree has become one of the premier gay square dance weekends. We have visitors from throughout the United States and Canada to dance with us during 3 days of fun and fellowship.
In 2011, our club hosted the annual IAGSDC convention. It was truly a highlight for the club. Our theme was "Gone With The Windmill." The windmill is a call at one of the upper levels of dancing. Most (if not all) conventions have a theme related to one the square dance calls on any list at any level. It makes a fun time having quirky names of conventions. Our fearless leaders for our 2011 convention were Alan Field, Ed Lieberman, and Kent Tolleson. We welcomed over 800 people from around the world to dance with us. Of course we couldn't have pulled it off without countless volunteers from our club and beyond. We were so successful that generous donations were made to the IAGSDC and other local Atlanta charities. Our club continued to grow after the convention.
Hotlanta Squares then made a move to a new location at the City of Light in October 2015. The new place provided a much-improved dancing space. Then in 2019 due to increased demand for the space at City Of Light, we moved to a new location at Peachtree Baptist Church.
Thanks to our dedicated and dynamic callers and club members, Hotlanta Squares has been thriving for over 17 years. The future looks bright for Hotlanta Squares. We are a diverse club with not only gay and lesbian dancers, but a number of straight dancers too. We say "come for the dance and stay for the friendship."
Our membership has grown from our humble beginnings of about 10 to 12 members to over 70 current members (2020).

Photos (click on any photo to see larger view)

Retrieved from "https://iagsdchistory.mywikis.wiki/w/index.php?title=Hotlanta_Squares&oldid=21965"
Category:
Cookies help us deliver our services. By using our services, you agree to our use of cookies.