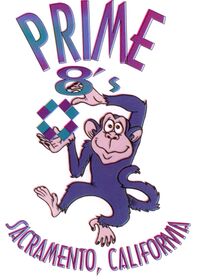 History:
From the Program Book of the 6th IAGSDC Convention, held in New York, NY in 1989:

Prime 8s was founded in October 1985 by a group of Capital City Squares members wanting to progress beyond the basic and mainstream levels then danced by that club. After a year or so of Plus dancing we are now finishing the A-1 class and starting A-2 in 1989. We became official members of IAGSDC at the Portland Convention in 1987.

From the Program Book of the 10th IAGSDC Convention, held in Seattle, WA in 1993:

Prime 8s was founded in October, 1985, as an outlet for learning successive levels beyond those taught and danced by the Capital City Squares. Initially teaching plus and later advanced, the club remains an arm of Capital City Squares and participates in its functions as well as hosting our own A level dances. The founders were Greg Loe--club instructor until he recently took a hiatus to spend more time with his lover--Stan Boyden, Bill St. John and Art Katz currently still dancing with the club; as well as Joy TeSelle, Corky Bolin, Rich Wilkes,Janelle, and Kim Brownlee.

We are currently dancing on club night to caller Dick Houlton from Stockton, California. Dick has been calling for more than 40 years and has been a great addition to our weekly program.

Additional Info: Prime 8s is a member of the Associated Square Dancers of Superior California (ASDSC) (since 199x) and has non-profit status as member of the Country Dance and Song Society (CDSS) since 2013.

Retrieved from "https://iagsdchistory.mywikis.wiki/w/index.php?title=Prime_8s&oldid=23520"
Category:
Cookies help us deliver our services. By using our services, you agree to our use of cookies.