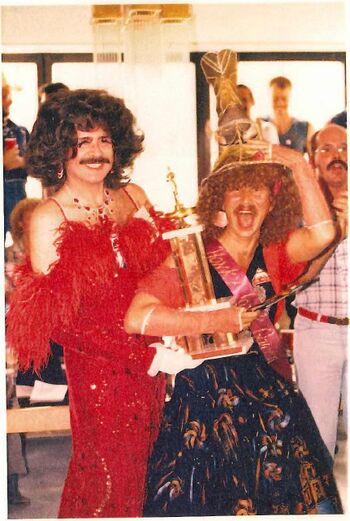 Ms. Virginia Slim was the original Honky Tonk Queen, reigning from 1984 - 1986. It is rumored that she was able to keep her crown for so long by not inviting any other contestants.

Chapter 1: 1984 Seattle, 1985 Denver, 1986 San Francisco
The Early Years (The Ones Without SYBIL)
The Honky Tonk Queen Pageant was originally created in response to a square dance record entitled "Honky Tonk Queen" recorded by two internationally famous callers, Paul Marcum and Elmer Sheffield. Both of these callers were at the first convention in Seattle. The song was such a hit with Miss Virginia Slim from Seattle that she created the Honky Tonk Queen Pageant. She not only created it, she crowned herself Queen! What a Woman! And by creating the pageant she it she established herself as one of the most important Drag Queens in all of Drag Queen history! Was it because she was the first queen? NO! Was it because she won the next year in Denver and the next year in San Francisco? NO! Was it because she was one hell of a lady who will always be in hearts of all the people who have had the chance to know her? NO! Any one of these would have been more than enough reason for the dear girl to go down in history, but all these reasons were overshadowed by her ultimate claim to fame. By creating the Honky Tonk Queen Pageant, IT WAS THERE FOR SYBIL TO WIN![1]

Retrieved from "https://iagsdchistory.mywikis.wiki/w/index.php?title=Ms._Virginia_Slim&oldid=25036"
Categories:
Cookies help us deliver our services. By using our services, you agree to our use of cookies.