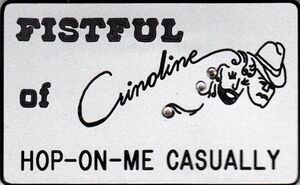 Status: Disbanded Oct 1990. The last Crinoline performance was in 1990 at the "Things That Go Bump in the Night" Halloween party for Tacky Tourists organization.

History: The members of Fistful of Crinoline began as students in Seattle's first gay square dance club, Puddletown Squares, and quickly tired of the caller's weekly complaints about the difficulty of calling to same-sex couples. After several less-than-successful attempts to solve the problem, a small group decided to take matters into their own hands. The solution seemed obvious: why not have a key square dressed in regular male and female square dance attire, thereby alleviating any visual confusion over who was dancing which role?
The "authentically dressed" key square's first performance was an instant hit. So enthusiastic was the reaction to their first appearance at a Puddletown Squares' class on March 9, 1983 that they were regularly invited to perform by a wide variety of gay organizations in Seattle and Vancouver, BC during the next year. After that first performance of "Honky Tonk Queen", Fistful of Crinoline grew to more than 20 dancers and continued to perform to wildly enthusiastic audiences. In their zeal, they stripped Seattle's thrift stores of used square dance clothing (well, the larger sizes anyway), became a discerning and regular customers at the local square dance supply stores, and gave new meaning to the word "colorful".
Fistful of Crinoline second year began with the St. Patrick's Day extravaganza "Erin go bragh-less" followed by a triumphant performance at the First International Gay Square Dance Convention held in Seattle in April 1984 (All Join Hands (Convention)). That historic convention performance featured two of the finest callers in the US, Paul Marcum and Elmer Sheffield, calling their infamous "Honky Tonk Queen" as their finale to the wild acclaim of the crowd and overwhelming amazement of the Crinolines!


Geoff Hamada: Choreographer Geoff began music and dance lessons at an early age, studying and performing through high school. After completing an undergraduate degree in music, he spent a year in Yugoslavia performing with the national folklore ensemble of the University of Belgrade. Geoff went on to earn an M.A. in Dance Ethnology from UCLA, where he taught courses in ethnic dance, dance research and notation before moving to Seattle. During the early 1980s, he taught courses in Yugoslav dance at the Northwest Folklore Center, and in 1982 helped found Puddletown Squares, one of the nation's first gay and lesbian square dance clubs. He was also an original member of the legendary gender-bending dance comedy troupe Fistful of Crinoline which he directed from 1983-89.

Retrieved from "https://iagsdchistory.mywikis.wiki/w/index.php?title=Fistful_of_Crinoline&oldid=26283"
Categories:
Cookies help us deliver our services. By using our services, you agree to our use of cookies.