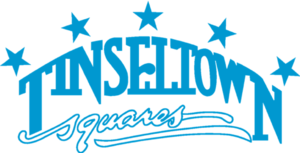 History: In the fall of 1986, in addition to the classes they were taking in a caller run square dance club, Ben Teller, Don Williams, Jerry Stevens, Steve Howell and Jack Newsbaum agreed they needed additional class time to hone their Plus Level square dance skills. The group chose Saturday afternoon as a convenient time. Ben volunteered to be the instructor having wrapped up his duties as founder and president of Avatar. Don provided the sound equipment and tapes expanding what he was doing for some exhibition teams. Trinity Episcopal Church at Berendo and Melrose was the selected location; the new group becoming part of the church's gay outreach program. The new group invited friends from New Year's Resolutions and the exhibition group called "Oil Can Country Dancers" to dance with them. After several sessions, it was apparent that the energy was there to form a member run club.

In early 1987, Ben has an idea - hold a Saturday night dance with a paid caller and open the dance to all square dancers. The group agreed. The caller that night was Paul Waters, who later taught Tinseltown's Mainstream and Plus Classes. The dance was a great success. That evening of dance convinced the group they wanted to form their own member run gay square dance club.

And the group did form their own club in March of 1987, naming themselves the "Tinseltown Squares", thus becoming the first gay and lesbian square dance club in Los Angeles. The name Tinseltown was selected to be inclusive of the whole film production area from the South Bay to North Hollywood. And indeed the membership was drawn not only from Los Angeles, but also from the surrounding communities like Pasadena, Long Beach, Burbank, San Gabriel, West Hollywood and Santa Monica. One of the original founding five is still a member. Ben and Jerry have gone off to other activities. Jack and Steve moved out of state. Steve later passed away. The club logo, badge and banner were designed by the talented Dennis Akazawa, now deceased. Dennis also appeared as Ms. Yo-Ho. Her last appearance was at the 1988 Phoenix IAGSDC convention.

For four and a half years, the Trinity Episcopal Church housed all Tinseltown classes and dances. In September 1991, the club moved to the Highland Ebell Clubhouse in the Highland Park section of Los Angeles. Built in the early 1920's, the Ebell has a two-story ceiling and a fabulous wood floor that thrives under the pounding of dancing feet.

During the first two years as a club, founding dad Ben Teller continued to volunteer as class caller and instructor. When the club finances were in the black, a decision was made to switch from a volunteer to a professional caller. Scott Byars was hired and taught Tinseltown classes for the next two years. In September of 1991, Paul Waters was hired as the class caller and instructor. When Paul, then a 20-year veteran of square dancing, began his association with Tinseltown he classified himself as "straight." We did too, with a wink. But as of September 1992, Paul saw the light and "came out."

1992 was busy year for Tinseltown members, performing square dancing demos at the Los Angeles Gay Pride Parade, Orange County Gay Pride Festival, Sunset Junction Street Festival, West Hollywood's Halloween Night, Floyd's in Long Beach, and The Rawhide in North Hollywood. And Paul was there calling the action. The Los Angeles Gay Pride Parade and the Halloween Night attracted television coverage so we were able to see ourselves via videotape.

In 1987, Ben Teller and Don Williams led a square of Tinseltown dances to Pioneer 8's, a straight club in Redondo Beach, just south of Los Angeles. Don was the Pioneer 8's Secretary and Ben was enrolled in the Pioneer 8's A-1 class. One day Ben asked if Pioneer 8's would welcome a square of same sex partners at one of their Sunday dances. They said not only "yes" but indicated that if any of their members didn't like it, that was their problem. For many years Tinseltown along with Golden State Squares had an ongoing relationship with the Pioneer 8's. Members of Tinseltown have also been active in the B&B's and Trailblazers. Many members of these clubs attended Tinseltown functions. And Tinseltown dancers joined with Pioneer 8's in the 1992 Doo-Dah Parade, square dancing down Colorado Boulevard in Pasadena. This humorous, anti-establishment parade was televised nationally.

25 May 2021:
Here is an update from Ross Frankel, a long time Member of Tinseltown Squares (TTS) talking about one of our founders. Another founder, Ben Teller, passed away from prostate cancer last year. He was an amazing early LGBT activist, founding TTS, AvatarLA leather club, and was on the board of the LALGBT Center, currently the largest LGBT Center in the world. Another early member, Kenneth Vannice, moved to Portland, and passed away a few years ago. He was a member of Rosetown Ramblers in Portland.

By the way, May 28th, 2021 is Don Williams 82nd birthday. Don is a TTS Founder, originally with the Dave Happy New Years Exhibition Dancers out at Oil Can Harry’s, a bar in the Studio City area, back in the mid 1980’s He helped teach early TTS dancing to taped calling. He was the fun badge tour sound system techie, using his own audio systems, that was key to make it successful. He was also a member with GSS(Golden State Squares), BS(Bloomin’ Squares), Royalty, Shoreline and Simi. Squares, He was an ambassador to a few straight but lgbt friendly sq dance clubs—including Pioneer 8s, where he was a club officer. Don is a founder of the Gay Callers Association and back in 1993-1994 he helped to write its constitution and bylaws (along with 5 others, such as the Bill Eyler and myself).

He might not be up for dancing 🕺 currently , but his quiet and steady support of lgbt sq dancing, indeed our community—and stretching across 5 decades, is truly humbling.

Retrieved from "https://iagsdchistory.mywikis.wiki/w/index.php?title=Tinseltown_Squares&oldid=21959"
Category:
Cookies help us deliver our services. By using our services, you agree to our use of cookies.