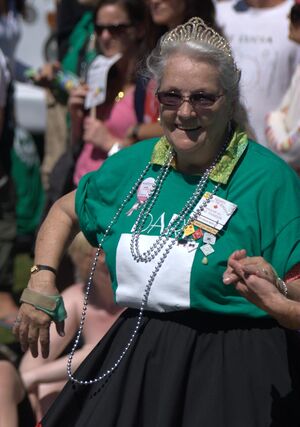 I moved to Vancouver in November 1994, from Montreal, where I had learned Square Dancing as far as Mainstream level. Making enquiries in North Vancouver about square dance classes sent me to the local club, The Weavers.

Nice people, all in crinolines and shirts buttoned to the neck and wrists, but being a Solo female, I was tolerated, but not exactly welcome. Later it was seen that I could dance "the man's part", and after that I was still tolerated, but also useful!

Summer time came along, and I joined other clubs from the Fraser Valley Square and Round Dance Association in outdoor dancing in Robson Square in downtown Vancouver. Of course I was a wallflower, but! I could see a square, dancing in the far corner, and they were having a wonderful time. Everyone laughing, and doing all kinds of actions, and I just moved down beside them, and enjoyed the rest of the evening, laughing along with everybody, but not dancing. On the drive home, I was informed that I had been watching the "gays".

No! I replied, they are Squares Across the Border.

It was a long week, until I got to Robson Square again, and this time, danced "Lead or Follow" with the best company I had found since moving to Vancouver. At the end of the summer session I was really upset that I wouldn't see them all for almost a year, when one of the boys said, "Why don't you join our club?" (By this time I had learned what gays were!) Seemingly, my eyes flew wide open as I said, "Can I?"

September found me learning Plus, and laughing until my sides ached! November was club Fly-In and it was a fantastic weekend. The next Convention was to be in San Francisco, so I started saving hard, to go with my dear friends in Squares Across The Border.

Well! My legs and feet were OK at Convention, but my neck, jaws and throat hurt badly from laughing! I will never forget my first Honky Tonk Queen contest or Fun Badge Tour, and now, thirteen Conventions later, they are still among the highlights of Conventions for me!

I have made many cherished friends all over the USA, Canada, and the wonderful Edo 8’s from Tokyo, Japan, that I can't say a big enough "Thank You!" to them all, for all the pleasure they have given me.

The incredible work of all the volunteers in "All Join Hands" and the IAGSDC has to be highly praised, and thanked. I wish them success in all future endeavours. I have proudly danced in Pride Parade in Toronto, San Francisco, and many times in Vancouver, and enjoyed them all, in the company in fine folks.

Thank you [all] for adopting me, as it has been [a] remarkable time in my life.

Mae Thomson
Squares Across The Border
Vancouver, BC, Canada

Retrieved from "https://iagsdchistory.mywikis.wiki/w/index.php?title=Mae_Thomson&oldid=3846"
Category:
Cookies help us deliver our services. By using our services, you agree to our use of cookies.