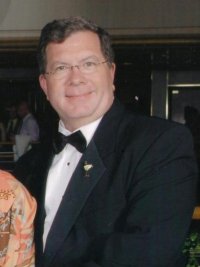 In his own words

Mike Jacobs was one of the founding members of ARTS and no longer on the board in 2009, however, he was at this board meeting for one purpose and backed by Ron Holland and Betsy Gotta they proceed to tell the ARTS Board that they would be remiss if they didn't admit All Join Hands as a governing board member. Later that year, Mike Jacobs passed away and I will never forget his words at that board meeting!

In 2006, Seth Levine presented All Join Hands, represented by officers Gordon, Randy Clarke, and Greg Wilson, with the Golden Boot Award.
In 2007, Gordon, on behalf of AJH, presented the award to Scott Philips.

Retrieved from "https://iagsdchistory.mywikis.wiki/w/index.php?title=Gordon_Macaw&oldid=23271"
Categories:
Cookies help us deliver our services. By using our services, you agree to our use of cookies.