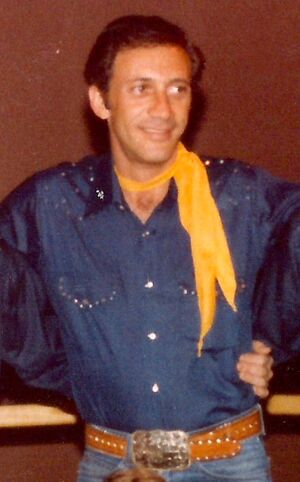 While he's at it, he can also put on a Stetson, hitch up his dungarees and ride in the rodeo.

That's a thumbnail sketch of Wayne Jakino, the Capitol Hill bar owner who brought verve to everything from barrel racing to breast cancer research, AIDS awareness to neighborhood improvement. "He was awesome in the community," said John Nelms, a friend and colleague for 25 years. "He worked for everyone, gay and straight, with incredible energy."

Mr. Jakino died Wednesday at his Capitol Hill home, after a 14-month battle with pancreatic cancer, in the company of his sister and his life partner, Dan Bray. He was 66.

Services will be at 3 p.m. Wednesday at Metropolitan Community Church of the Rockies, 980 Clarkson St. On Aug. 3 at 2 p.m., a celebration of Mr. Jakino's life will be held at Charlie's, 900 E. Colfax Ave., the "Lil Ole Bitty Pissant Country Place" that he helped turn into one of the most famous gay bars in America and a focal point for social activism.

Born April 15, 1942, in Durango, Mr. Jakino grew up on his family's ranch there, wrangling cattle and heaving hay bales. After high school, he came to Denver at age 19, studied design and started up an interior design company, Jake Limited. In 1981, he and partner John King opened the first Charlie's at 7900 E. Colfax Ave. Eight years later they moved into the old Emerson Street East space in Capitol Hill and thrived.

Through the years, Mr. Jakino raised more than $2 million for local charities and political campaigns. He was a factor in the elections of then- Denver District Attonry Bill Ritter (now Governor Ritter) and current D.A. Mitch Morrissey.

In the 1990s, Mr. Jakino taught gay sensitivity classes to Denver police officers, then led by Chief Dave Michaud, and when controversial Amendment 2, which proposed rollbacks on gay civil rights, came before the state legislature, he advised then-Mayor Wellington Webb and then-Gov. Roy Romer to stand with the Gay-Lesbian-Bisexual-Transgender community in opposition to it.

"He had a huge effect on people," said his sister, Virginia Nanna. "Wayne envisioned things. He was a mentor and a teacher. He always gave everything of himself."

In 1981 he helped found the Colorado Gay Rodeo Association, then the international version. When his own days as a horseman were over, he became one of gay rodeo's most popular announcers.

Mr. Jakino met Dan Bray, a transplant from Potomac, Md., in 1999. On Dec. 23, 2003, they performed their own wedding ceremony - just the two of them, a bottle of champagne and a gold ring - in the house they shared on Emerson Street.

"Given all the things Wayne was doing in the community, and the way he made everyone feel, he was there for them," Mr. Bray said, "I wondered at first if he could have anything left - if he could be available emotionally for me. But he always was. As wonderful as he was in public, he was even more wonderful at home."

In addition to Mr. Bray, Mr. Jakino is survived by his sister and their parents, James and Lillian Jakino, all of Durango, and two brothers, Richard, of Montrose, and Michael, of Farmington, N.M. The family will have a private interment-of-ashes ceremony July 26 at Greenmount Cemetery, Durango.[2]


Lewis Wayne Jakino, owner of Charlie's Bar and founder of the IGRA and CGRA Organizations, as well as many other gay rights affili- ations, died on Wednesday July 16, 2008 in Denver. He was 66 and had been fighting a hard battle against pancreatic cancer for the past year. What people will remember most about Wayne was his casual de- meanor and inviting smile. More than an activist or business owner, Wayne was a friend to us all and will be sorely missed. Wayne is survived by his life part- ner, Daniel Bray, his father and mother, James and Lillian Jakino, his brothers, Richard and Michael Jakino, and sister, Virginia Nanna. Services will take place Wednesday, July 23, at the MCC, 960 Clarkson St., Denver at 3:00 p.m. with a celebration of life to take place at Charlie's, 900 E. Colfax Ave., on Sunday, August 3, at 2:00 p.m. In lieu of flowers, memorials may be made to the Wayne Jakino Scholar- ship Fund through the IGRA organization.[3]

I would call Wayne a noble visionary. He had lots of grand ideas, and within rodeo, the country bar scene and gay business, he was good at organizing and motivating people. He accomplished much and was highly respected in Denver and around the country. He received many awards for his efforts. In the mid-1980s, probably just after the Denver convention, he let go of square dancing. His interest had been in styling and performance, and more and more, people were interested in squares for social interaction and climbing to the higher levels. Mile High Squares continued on a few more years under the leadership of Bud Rhyne. It, too, diverged from the rodeo association, but there really was no need for two gay square dance clubs in Denver, and finally, in early 1989, the club folded.
— Karl Jaeckel [4]

Retrieved from "https://iagsdchistory.mywikis.wiki/w/index.php?title=Wayne_Jakino&oldid=21822"
Categories:
Cookies help us deliver our services. By using our services, you agree to our use of cookies.