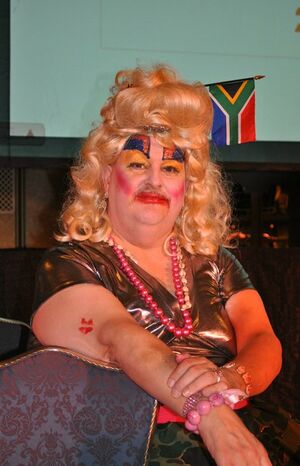 1995 Chicago
MY KIND OF TOWN
This was the 10th Anniversary of the Honky Tonk Queen contest, and began with a rousing rendition of The Cellblock Tango, featuring all living former Queens, as well as the remains of Sybil, although she had died during a botched abortion at the hands of an unlicensed veterinarian two years earlier. And although dead two years, she actually looked better than she had alive. Hmmm.

The contest has two memories attached, Lois’s and Tami’s.

Lois writes: My convention, my town, my win. Me, Me, Me! Oh yeah, a note to all of those people who asked how long Lil Biddydick and I worked on our “no speaking” routine. Exactly 30 seconds prior to the beginning of the contest. I didn’t want to run at all - couldn’t stand being the “Susan Lucci” of the Honky Tonk Queen contest again. And let’s be honest - if the judges had been as smart as the judges the following year, Elvis would have won in Chicago. Thank God I didn’t have to try to live that one down. I really think that would have been the final nail in Lois’ coffin. For those of you who had the fleeting thought “GOOD!,” bite me, okay?

Retrieved from "https://iagsdchistory.mywikis.wiki/w/index.php?title=Lois_Carmen_D%27Nominator&oldid=22658"
Categories:
Cookies help us deliver our services. By using our services, you agree to our use of cookies.