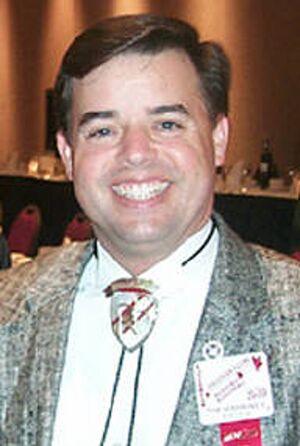 We are very excited to have Tim calling our Trail-in dance. Tim is a regional favorite and member of the Metrolina Callers and Cuers Association. An accredited member of CALLERLAB, he serves on the Board of Governors and is the current Chairman for the organization. He is also a recording artist with an extensive catalog of recordings to his credit.[1]

We note with great sadness the passing of Tim Marriner, one of the truly greats among us in the Wonderful World of Square Dancing. Tim had been doing a calling weekend in Canada, and returned home to Rock Hill, S.C. in the wee hours of the morning, where he and his beautiful wife Donna enjoyed their sea-side retreat. Sometime shortly after returning, Tim suffered a massive heart attack and passed from this mortality, to his new calling in the eternal kingdom of Our Creator.

Tim’s home in Rock Hill, S.C., was not far from Myrtle Beach, and as a consequence, Irma and I got to dance with him often. He always seemed to remember Irma’s name, as I am sure he did many; a hallmark of many great callers. I took the introductory picture above of him two winters ago at a big dance in Myrtle Beach.

Tim actually started calling on a dare in 1973 during an Amateur Night. That’s all it took; he soon had his own club, and by October of 1987 he was a full-time professional caller, touring extensively across the United States, and had standing dates in Australia, Belgium, Canada, Denmark, England, Finland, Germany, Japan, Mexico, Norway and Sweden! Of course he was on staff at various resorts, and had a recording contract with ESP Records.

Tim was a member of the Metrolina Callers and Cuers Association; an accredited member of CALLERLAB, serving on the Board of Directors Executive Committee and was a past chairman.

You might wish to offer your condolences and remembrances to his wife, Donna Marriner, at PO Box 37178, Rock Hill, SC 29732. I include a picture of Tim with his wife Donna. You might wish to remember happy times you shared, for Tim was not just a caller, he was a true entertainer, with so many “twists” to his singing routines, probably as a result of his belonging to several Jazz choirs in college, that he always added that something extra to your evening of enjoyment, making them memorable … even into Eternity!

And should you be so inclined, as I certainly will be shortly as I wrap this up, and end my evening in thankful prayer, I will be thanking God for blessing my life with the friendship of this special child of His, that He has now called home; certain in the knowledge that his work has now just truly begun. --Dick Halstead[2]

Retrieved from "https://iagsdchistory.mywikis.wiki/w/index.php?title=Tim_Marriner&oldid=26111"
Categories:
Cookies help us deliver our services. By using our services, you agree to our use of cookies.