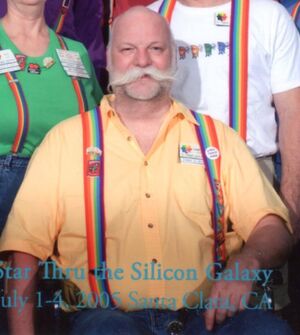 At Star Thru The Silicon Galaxy, 2005

Cameron Alexander Robb passed away at 5:55pm Saturday evening, July 30 2005 after an l8 year battle with a brain tumor. Cameron was a fighter, incredibly strong, and bore the burden of the cancer far longer than anyone should have to.

Cameron was involved in many activities and groups – his career at Sun Microsystems, a member of All Saints Church in Pasadena and Palo Alto, the San Francisco Gay Men’s Chorus, the livejournal.com community, Bay Area bear groups, and square dancing with the El Camino Reelers. Cameron was in particular excited and proud of his involvement with the 2005 IAGSDC convention “Star Thru the Silicon Galaxy”. Not only was he an active member of the convention planning committee, this was also his 10th convention, and this year he received his 10 year medallion. He looked forward to that moment so much.

He is survived by so many people who love him – his partner Scott, his sisters Mary Beth and Alison, and so many friends and family. He is being missed and will always be missed.

Please remember him fondly in your hearts, think of him in your prayers. He is finally free of the burden of the cancer now, and at peace.

A memorial service is being planned. The specific date, time, and place will be announced in a future email message.

For those who are now searching their memory and wondering if they have correctly identified Cameron, I want to add this visual clue: At the medallion awards at STSG, Cameron was wheeled out onto the stage in a wheelchair by his partner Scott Farrar. He received a fairly extended standing ovation with Scott standing behind him.
It was very moving, so I'm sure many remember it.
I can hear the clapping still resounding, now.
Best,
— Moria M, ECR [2]

stunned silence
thoughts, emotions tumbling, jumbling
tears half-forming, not believing
memories popping in and out, bringing semi-smiles
realizing there can be no more future memories
tears fully forming, but not yet falling
kept back for the moment by gratitude:
better to have some memories, some shared experiences, some connection
than never to have had any at all

<When will I stop being shocked whenever a friend dies? Even when I know it might be coming? Why 2 in 1 week?>

I am so grateful that I got to spend time with Cameron at convention. Cameron was one of those people who I thought would be around forever. I didn't realize until now that for me he was a rock in the square dance community. He was always around. A room was just better for his presence. I will miss his devilish sense of humor, his laughter, his perspective on life, his comfortable physicality, his various unique and amusing facial expressions. Thank you for being you, Cameron....

Retrieved from "https://iagsdchistory.mywikis.wiki/w/index.php?title=Cameron_Robb&oldid=23653"
Categories:
Cookies help us deliver our services. By using our services, you agree to our use of cookies.