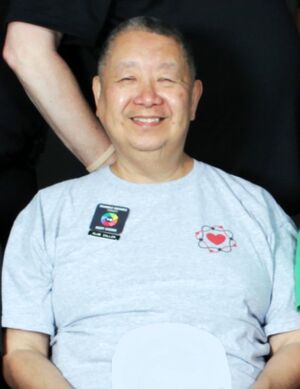 Dancing History
I was first exposed to square dancing with the University of Toronto Outing Club, an outdoors club whose occasional indoor activities included one-nighter square dancing. Subsequently, I joined the gay community’s equivalent - Out and Out, and from there heard of the formation of a square dance club. I joined Triangle Squares for its 2nd class ever (its only summer class) in the summer of 1988.

Going into the fall, there were 3 classes packed into one night. My mainstream class was sandwiched between a new Basic class and the earlier Plus class. Meanwhile, over the summer of 1988, Don St. Jean and Chris Homer had attended a caller school with Joe Uebelacker, and were getting practice by calling Plus workshops at a school 2 blocks from my home. When I made a curiosity visit, I found that they were having trouble getting a full square, dancing with ghost dancers, and I was tossed a Plus manual and invited to join. So I ended up doing the Mainstream and Plus classes in parallel.

I had so far been dancing boy, with my previous history dancing boy at UTOC. Over Christmas 1988, a gay caller from New York came to do a “rusty dancer” workshop, and I took that opportunity to learn to dance girl. By the time we completed classes and had Triangle Squares’ 1st fly-in in March 1989, I was bidansual Plus. I still remember the dancer’s high when my square executed a tip without breakdowns.

Triangle Squares taught no new programs over the rest of the season. Anne Uebelacker mentioned the annual convention held by the Toronto and District Square Dance Association in early May, where we would probably be OK to dance our natural gender in appropriate square dance attire. This was held about 40 miles away, in McMaster University in Hamilton, where I had previously studied. Triangle Squares co-founder Andy Chow and I went to visit. There were no partial-time registrations, but Chow borrowed my badge and paid the full fee to dance anyway. Meanwhile, I checked out the vendors (in a balcony area overlooking the Plus hall), and purchased a pocket Advanced program manual. At the end of the evening, Chow returned, and introduced me to his partner, square dance solo Ruth Dartnell.

For the 1989-1990 season, Anne and Joe Uebelacker decided to try their luck in the snowbird community of Florida, leaving Don and Chris to teach / call for Triangle Squares. While no new programs were taught, I had read the Advanced manual, and went to fly-ins in Chicago and new York, and had been observing the A dancing.

The 1990 IAGSDC convention was held in Vancouver over the April Easter weekend, and it had a full-time A1 hall. I repeatedly returned to watch, and on Sunday morning, where there were only 7 other dancers available, I stepped in and successfully danced A1 the rest of the day. In May, I returned to the T+D convention, which had a full-time A1 hall. I danced there with some single black ladies from the Detroit area (some of whom sometimes wore a “boy” sash), one woman from northern Ontario whose husband would not arrive until Saturday, and eventually met up again and danced with Ruth Dartnell.

Subsequently, Ruth and I formed a conventions-based dance partnership. Both of us moved up the programs tp C3A in a mostly self-taught manner over the next decade or so, until her divorce and lack of money forced her to stop dancing. So it was fortuitous that I met her and managed to move up in partnership.

Calling History
Based on singing calls, I had joked that calling was like karaoke, except that people actually had to listen to you. I attended my first caller school - the one held by the Gay Callers Association just before the 1990 Vancouver IAGSDC convention. The next fall, since I was the only Triangle Squares person with actual A1 dance experience, I got an hour (out of 2) of the new A1 class. At the GCA callers school the next year, I was surprised that, instead of being placed in the Intermediate group, I went directly to the Advanced group. Later, I figured out that not many newer callers would have regular responsible calling experience.

Since then, I have called every year for Triangle Squares, usually teaching or calling at the highest program. My moving up in dancing programs allowed me to keep ahead of what I would be teaching, while keeping the calls fresh in mind even if I wasn’t dancing them. The calling peaked at C3A, where various drop-outs (e.g. snowbirds), and a lack of possible students (where was no C2 group) caused the C3A group to collapse, and the club went back to C1 as its highest official program. By about 2010, Triangle Squares has rotated callers between classes at the request of the dancers, who found it useful to dance to a variety of callers. I have mostly taught or called at A or C1, with an occasional foray into Plus.

Outside of Triangle Squares, I have guest-called at IAGSDC conventions, fly-ins, the T+D convention, and various Canadian National conventions. Calling highlights include calling the Moonshine hour at the 2009 Washington convention with Anne Uebelacker and John Oldfield, calling to square dance leaders at Legacy (and my 1st experience with a Century Book), and being part of the Triangles Squares team calling to a visiting German square dance tour group.

Related Activity
Early on, I had joined the Triangle Squares Steering Committee, until the club built up enough money to pay its callers, when I had to leave. My position was IAGSDC representative, with the main responsibility of attending the IAGSDC meeting at conventions, of which I went to almost all. While doing so, I also picked up a semi-official responsibility of representing the club at the T+D Association. For the IAGSDC conventions hosted by Triangle Squares, I was either on the caller scheduling committee or was head of caller scheduling. I received a special Silver badge for services to the club.

In the spring of 1993, Legacy, the association of square dance leaders, met in the Toronto area. The IAGSDC suggested that gay square dancing should be represented, and I joined up - barely qualifying with either 5 years’ dance experience or 3 years’ calling experience. I’m sure Bob Young (and maybe one other) was there representing the IAGSDC, and likely Chris Homer for Triangle Squares as well. I subsequently went to some other of their annual meetings, until the group disbanded.

I joined the T+D Association, which is mainly a caller / cuer / prompter group, mainly to meet other local callers. I also represented Triangle Squares there while I was a member of the club’s Steering Committee, arranging to pay for liability insurance via the Association. After I quit representing the club, the club purchased its own “associate membership”. I remain a member, though rather inactive.

I am a member of the Gay Callers Association. I have on various occasion contributed an article to the Call Sheet, its newsletter.

I also am a member of Callerlab, and a fairly active (by e-mail) member of several committees, including Challenge, Definitions, Mainstream, Plus. I have a Quarter Century certificate for Callerlab. Wow, I’ve been in this activity for a long time now!

Retrieved from "https://iagsdchistory.mywikis.wiki/w/index.php?title=Andy_Chong&oldid=24421"
Categories:
Cookies help us deliver our services. By using our services, you agree to our use of cookies.