The Guide to IAGSDC Convention Chapter 29

Who is "Frank" and why do people keep telling him to shut up?

"Frank" is "Frank Yellin", a dancer from the San Francisco Bay Area. Rather than trying to explain how this sound effect came about, it seemed easiest to let Frank tell you about this rich IAGSDC Tradition himself. Besides, as you'll soon read, it's all his own fault, anyway. 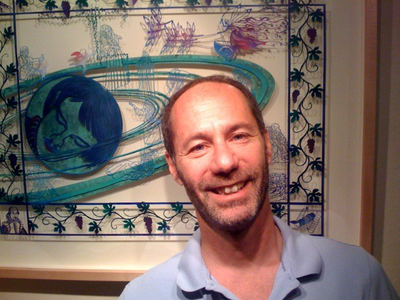 "Shut up, Frank" is one of those rare sound effects that can be used for several different, unrelated calls. While most commonly heard after any Interlocked Scoot And ... [C1 and up] call, it can also be used for Chain Reaction [A2] and for the call Straight Fire [C4]. Historically, this sound effect was first used in Chain Reaction. Dancers are usually taught that this is a four-part call. At some dance, I just blurted the phrase "Hinge, Fold, Pass, Peel"* when the caller called Chain Reaction. I don't know why.

The reaction was astounding. The new A2 dancers were thankful that I had reminded them of the definition, before realizing with horror that I was reciting the definition for the wrong four-part call.

Eventually, I would say this mantra most times that Chain Reaction was called. Any time that Carla Turpin was in the square, she would reply: "Shut up, Frank." ... but in a clearly fun and teasing tone.

A few years later at a tape group, we were listening to Steve Kopman call C3. Apparently this tip was his "interlocked" tip, because almost every other call was Interlocked this, Interlocked that. On this particular tape, Steve always pronounced the word as "IIINNN-terlocked," with the first syllable extra, extra long. Paul Asente picked up on this, and was soon repeating "IIINNN-terlocked every time Steve called it.

Well, I flattered Paul by imitating his sound effect in my C4 tape group. Any time any caller used an Interlocked call, I would respond "IIINNNterlocked..." Of course if Carla were there, she would respond "Shut up, Frank."

Making things even more difficult, any time the [C4] call Straight Fire came up, I'd respond "I can't do that call."

Some dancers apparently believed that I honestly didn't know the call, rather than that I was making fun of the name of the call. And when Carla was there..."Shut up, Frank."

Carla goes to many more out-of-town dances than I do, and for these calls, she continued to say "Shut up, Frank" even though I was nowhere to be found.

Its use for Chain Reaction has mostly died, except as a private joke between Carla and me. But it continues to thrive for the other calls. And sometimes people just say it at random. But, hey – it's made me part of LGBT square dance history!

Retrieved from "https://iagsdchistory.mywikis.wiki/w/index.php?title=The_Guide_to_IAGSDC_Convention_Chapter_29&oldid=18790"
Category:
Cookies help us deliver our services. By using our services, you agree to our use of cookies.